Are the social and mainstream media at odds over Leno’s remarks? 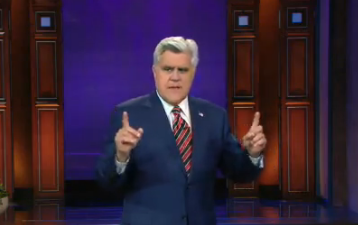 Jay Leno’s wise cracks at the expense of Brian Cowen have met with uproar from the media, most of whom are disgusted at the treatment of the ‘Prime Minister of Ireland,’ but those sentiments don’t seem to be share by Ireland’s social media users.

During the opening monologue to his late night show Leno showed a picture of Cowen and asked if the audience they could tell if he was a “Bartender, Politician or Comic.” Leno ended the gag by saying that “it’s good to know we’re not the only country with drunken morons.”

The Monday night monologue has become an instant hit on YouTube with one copy of the video, posted by IrishPolitics, generating 100,000 views in the past 24 hours. But rather than being apoplectic with rage many YouTube users have been calm about the piece. yimyam9 said,

“Dont see what the problem is. If it was any other country’s leader that did it﻿ we would take the mick. And lets face it cowen was a bloody moron for what he did. A bit more common sense in the leader of the country would be nice. Leno as a comedian (though i use that term loosly with him) was﻿ just using a funny newsworthy piece. ”

Irish Twitter users also seem to be far more forgiving of the situation than the press.

Twitter user @ralphuhlemann said today “Lets be clear! Jay Leno has not caused offence to the Irish public. If Cowen gives a COMEDIAN gives such material, what do u think he’d do!” @irish_eagle described the official response to the story as “Too Funny.”

While the social web has also been critical of Cowen the continued debate of the story across the social web would seem to suggest the widening areas of debate being used in Ireland.

What are your views of the monologue? Has the press over reacted or has Leno overstepped the mark? Add your comments here